My former undergraduate ideological mentor at Bayero University Kano by the name of Yunusa Zakari Yau (popularly known as Y.Z. Yau) wrote a Facebook status update on August 15 that aptly captured a barely expressed but nonetheless widespread sentiment. “[President Muhammadu Buhari] seems contented to answer the title of president and watch the old days of impunity rolling back to traumatize Nigerians,” he wrote.

Y.Z.’s status update might have been inspired by a general philosophical anxiety about the progressively disconcerting direction of the Buhari administration. But President Buhari’s baffling silence (and apparent inaction) in the face of the Nigerian military’s farcically inept publicity stumbles after the release of Boko Haram’s recent propaganda video tends to reinforce notions that he is an out-of-touch president who has ensconced himself in the plush luxuries of Aso Rock and allows the country to be on autopilot. 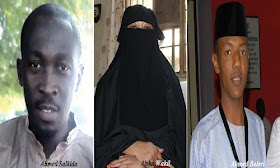 I have written at least three Facebook status updates on the Nigerian military’s ill-advised issuance of a wanted notice for journalist Ahmed Salkida, NGO activist Ahmed Umar Bolori, and self-described Boko Haram benefactor Aisha Wakil. It’s obvious to any perceptive observer that the wanted notice was a mere frivolous publicity stunt designed to deflect attention from the reputational hit the military took from the Boko Haram propaganda video.

There is no greater evidence for this than the fact that when Ahmed Bolori turned himself in to military authorities upon reading in the media that he had been declared wanted, he was told to “go home” and return the following day—after waiting for hours on end and making calls and sending text messages to senior military officers who are personally known to him, including the man who signed the wanted notice. Who issues a “wanted notice” for people without any interest in seeing, much less interrogating, them? Aisha Wakil, who should be in jail based on her well-documented self-admission that she is an enabler of Boko Haram’s mass slaughter of innocents, also bragged that she was available to be detained.

Well, certain conditions should precede the issuance of a wanted notice for people. They should have been invited to answer questions about their complicity in a crime. They should have spurned such invitations to appear before law enforcement agents— and gone underground. And after they were arrested, charged, and detained, they should somehow have managed to escape, and be in danger of vanishing into thin air. None of these scenarios happened.

People who initially defended the military’s bungling, hasty, unjustified issuance of the wanted notice said there was method in the military’s madness. But in the face of the unexpected backlash against its reckless unprofessionalism, the military was impelled to walk back its initial press statement. Director of Defence Information Brigadier General Rabe Abubakar said on Channels TV on August 16 that “declaring [Salkida, Bolori and Wakil) wanted was not our intention. We are inviting them to come and shed more light on Boko Haram so that collectively we can achieve the desired goal.” 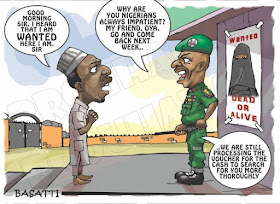 But how do you “invite,” through a news release, people whose contact information you already have, with whom you relate on a periodic basis, and whose homes you know? What sort of “invitation” is that? And, although Brigadier General Abubakar said the military was merely seeking the cooperation and help of Salkida, Bolori, and Wakil, acting Nigerian Army Spokesperson Colonel S.K. Usman threatened them in public media. “They were evasive. They wanted everything on their terms,” he said in a press statementafter meeting with Bolori and Wakil. “We are determined. They must cooperate.”

Seriously? How do you injure people’s reputation before the whole world (supposing they are innocent), threaten them publicly, and expect them to help you with the information you need to do your job?

This all frankly feels like watching an unimaginative, low-budget, slapdash Nollywood movie about clueless dolts.

Before I’m misconstrued, let me be clear that I’m NOT calling into question the propriety of inviting, detaining, or interrogating people who might help the military in its fight against Boko Haram. I have a lot of respect for the valiance of our military, which has seen Boko Haram nearly decimated. I support any legal and sensible effort to bring a total end to Boko Haram’s deathly grip on Nigeria’s northeast. But it is irresponsible, and even unlawful, to issue a wanted notice for people who are not in hiding, who haven’t repulsed any invitations, who haven’t been formally charged with any offense, and whose cooperation you desperately need in your anti-terrorism fight.

Issuance of wanted notice for people who haven’t been charged with any wrongdoing is a prima facie case of libel.  As my friend Dr. Raji Bello has pointed out on Facebook, the wanted notice has been archived in national and international media platforms, and is indexed by search engines. Hundreds of years from now, these people will be remembered as people for whom a wanted notice was issued by the Nigerian military. That’s incalculable injury to their reputation. If they are, however, found guilty of aiding Boko Haram terrorists by a competent court, the negative publicity would be warranted.

But more than anything, it’s a grave strategic and tactical miscalculation to publicize information about the people the military needs to get to the root of the nagging Boko Haram insurgency. The three “wanted” or “invited” people could easily have been invited quietly without all the media circus. We shouldn’t be discussing this issue in the media. The military, through its incompetent information management, drew us into this.

The needlessly exhibitionist tactics of the military has the unsettling potential to reverse the gains made against Boko Haram and to further endanger the lives of the Chibok girls and hundreds of other innocent people in Boko Haram captivity.

The media bluster and the incoherent, mutually contradictory press statements from three different military spokespersons these past few days were obviously merely intended to impress President Buhari and to counter Boko Haram’s recent propaganda against the military. But that’s a singularly irresponsible way to handle delicate military intelligence matters like this.

And that’s why President Buhari needs to show decisive leadership now. He isn’t just the president and commander-in-chief, he is also a retired general—and a former military head of state to boot. His seeming silence and indifference to the military’s current avoidable reputational self-destruction is helping to feed the narrative that he is simply “content to answer the title of president”—and enjoy the perquisites that come with it— but either unwilling or unable to do the hard work the title demands and entails. That’s a dangerous narrative he must not allow to take root—if he is still interested in bringing about the change he promised us and leaving an enduring legacy.

Please let us have your response